How To Remove A Chimney Breast- A Complete Guide For You

Fireplace- a structure made of bricks to accommodate fire to keep the area warm. The concept of the fireplace was put forward in the mid of 17th century. It led to the evolution of the fireplace. Over time, numerous experiments were done to create new designs and styles. Here, the idea of chimney breast emerged. The majority of homes in the UK contain a fireplace with the chimney breast however, many do not like the idea of having it. Therefore, they look for alternatives. some even go to remove chimney breast. Many times, individuals in the UK seek help from professionals in removing a chimney Breast. Here in this article, we will be focusing our attention on an idea that includes removing a chimney breast.

What is Chimney Breast?

A chimney breast is a part of the chimney or an extension of the fireplace against the wall. Its main purpose is to accommodate a fireplace. It is projected forward from the wall so that you can easily establish room for your fire. It is commonly seen in the living areas of the ground floors extending upwards to the roof to let the smoke out of the home instead of accumulating in the house. A breast chimney may be of bricks or sometimes concrete.

Why do You need To Remove It?

TIt is not a rule of thumb to remove chimney breasts from your home. People may have various concerns regarding the area that the chimney breast occupies so they go for its removal. It does not do any harm whether you want to remove it or not. It should be noted that open fireplaces have the lowest efficiency rating of all solid fuel heating methods. If this is the case, then many people will consider removing their chimney breast in order to install a more environmentally friendly fireplace that effectively heats their homes and reduces their home heating bills.

Removing a chimney breast can cost you a fortune. You can go for the alternative option which is doing it yourself. Here are the steps to remove chimney breast: It is simple to remove external chimney stacks without causing any interior damage. Although it is a bit difficult to remove an internal chimney, it can create a great deal of dust and debris.

• Clean the area that needs chimney breast removal.
• Seal it so that the dust does not approach other areas of the home.
• Disconnect any fuel, gas or electricity connections. Also, if you share any connection with a neighbour do let them know before working.
• Before demolition of the chimney breast, make sure you provide support to the upper parts of the chimney through stacking.
• The stack must be properly supported.
• Start removing the bricks one by one.
• Use a hammer to do this
• once you have removed all the bricks, make sure to secure the wall.
• Once you have secured the wall, clean the debris and the mess created by demolition.

Can You Remove Chimney Breast Yourself?

Removing a chimney breast can easily be done without a professional. Nevertheless, if you find it difficult, you can contact us now to have your chimney breast removed.
Even though it is possible to take out chimney breasts by yourself, you should keep in mind that this is not a simple task that you can do at home. A chimney breast is a similar architectural feature to a load-bearing wall that you are removing. Therefore, there are many important things that you should be aware of unless you are an engineer.

You will need to follow Part A of UK Building Regulations to make sure your structural works are compliant when removing a chimney. This issue can either be dealt with by contacting your local authority and requesting a building control officer to be assigned to you or you can contact a licensed building inspector to handle it for you.
The quickest way to get your paperwork in order is usually to hire an approved inspector. You’ll receive a certificate once the work is complete, no matter what route you’ve taken. This will provide you with proof that all legal requirements have been met.

Do you need a Planning Permission?

It is possible to get planning permission to remove a chimney breast first for some homes – but only if this will change the exterior appearance of the building. The chimney stack in your house may be restricted by the preservation of the building if, for example, you live in a listed building. There is a good chance that this won’t be an issue for most homes, however, it is always smart to verify before moving forward with the rest of the building process.

Removal of chimney breast is time taking. Therefore, it requires some special considerations to be put forward. Read the below instructions carefully before removing a chimney breast.
• There is no way around drilling bolts into solid brickwork and not into the mortar joints between bricks. Several problems may prevent this option from being accepted by building control in some areas of the country, depending on the condition of the brickwork.
• Angle members for the brackets should be 75mm x 75mm x 6mm mild steel, with fillet joint shop welded 6mm thick, and pre-drilled for two M12 chemical or resin anchor bolts.
• To prevent debris and soot from falling from the remaining chimney, a plate should be placed on the top of the brackets.
• Above the roofline, the retention chimney breast needs to be at least as high as the brickwork.
• Removing fireplace hearths from the ground floor or the first floor would be advisable as well.
• A ventilated cowl should be placed on top of the chimney pot and an air brick should be inserted at the bottom to ensure any rain or condensation drying by natural convection. 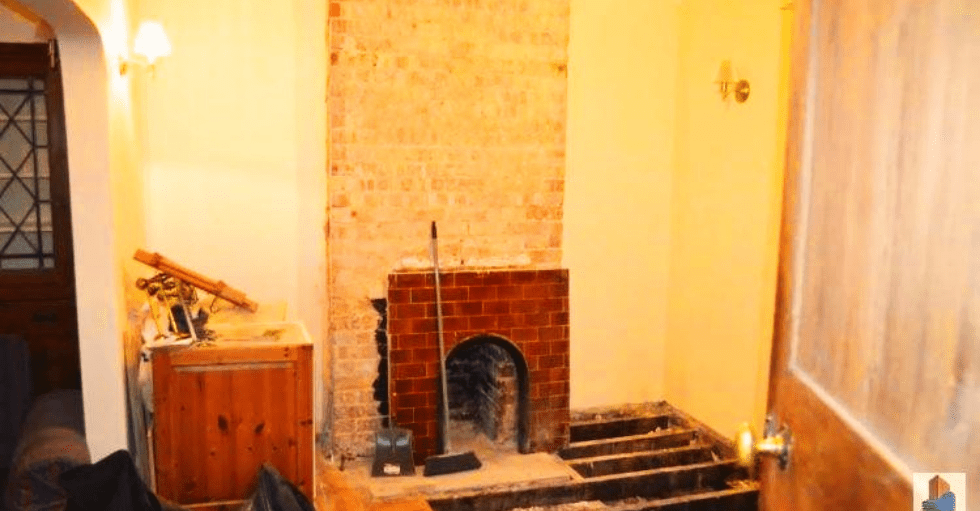 If you are going to remove your chimney, it does not always mean that you will need to remove everything from top to bottom. In addition to the fact that such a job would be a monstrosity, it would also be extremely costly, and extensive design would likely be needed. Thus, instead of removing key sections, most companies will simply modify the existing structure. The cost to remove a chimney breast is much more than you expect.
The price of your chimney removal varies according to how comprehensive the removal process is.
It is estimated that it will cost around £900 to £1700 to remove only a chimney stack. As a general guideline, the cost of removing a fireplace downstairs will be about £1500 to £2000, while the cost of removing a fireplace on the first floor will be between £1600 and £2100.

Does Removal of Chimeny Breasts Devalue the House?

chimney breasts play a key role in establishing a traditional ambience, which is very appealing to buyers who want a home with a traditional feel. In older homes, removing the chimney breast makes the property significantly less appealing to potential buyers. In addition, the value of the house could drop, and you may not be able to sell it as quickly.
There are some circumstances where you can create more space by taking out chimney breasts if you live in a less traditional house, which will, in turn, increase the chances of it being sold at a higher price. To gauge what is right for the local market, it is important to look at what has happened in similar nearby properties. Keep building reports and surveys that prove that you have followed all local authority requirements if you are removing a chimney breast

removing a chimney breast can be considered a good initiative towards making your space vast. However, the cost and labour involved may be tiring. You will have to consider many aspects so that it goes well. Slight negligence when removing a chimney breast can lead to disasters. Therefore, it is advisable to consider hiring a professional architect or engineer for this purpose.

We use cookies on our website to give you the most relevant experience by remembering your preferences and repeat visits. By clicking “Accept”, you consent to the use of ALL the cookies.
Cookie settingsACCEPT
Manage consent

This website uses cookies to improve your experience while you navigate through the website. Out of these, the cookies that are categorized as necessary are stored on your browser as they are essential for the working of basic functionalities of the website. We also use third-party cookies that help us analyze and understand how you use this website. These cookies will be stored in your browser only with your consent. You also have the option to opt-out of these cookies. But opting out of some of these cookies may affect your browsing experience.
Necessary Always Enabled
Necessary cookies are absolutely essential for the website to function properly. These cookies ensure basic functionalities and security features of the website, anonymously.
Functional
Functional cookies help to perform certain functionalities like sharing the content of the website on social media platforms, collect feedbacks, and other third-party features.
Performance
Performance cookies are used to understand and analyze the key performance indexes of the website which helps in delivering a better user experience for the visitors.
Analytics
Analytical cookies are used to understand how visitors interact with the website. These cookies help provide information on metrics the number of visitors, bounce rate, traffic source, etc.
Others
Other uncategorized cookies are those that are being analyzed and have not been classified into a category as yet.
SAVE & ACCEPT